If you’re the proud owner of a racing/driving game for your PS4 such as Project Cars, then you’re going to want to get yourself a steering wheel in order to optimise the experience; it’s as simple as that.  For the PS4, for some reason (you’d probably get an answer from either Sony or Thrustmaster) you are limited to Thrustmaster wheels – although they are a good quality brand, this fact serves to frustrate many a PS4 gamer who, reasonably I feel, object to being limited in such a way.  Anyway, given that this is the case, let’s just accept the fact and look at two of the brand’s best options, each at opposite ends of the price spectrum. 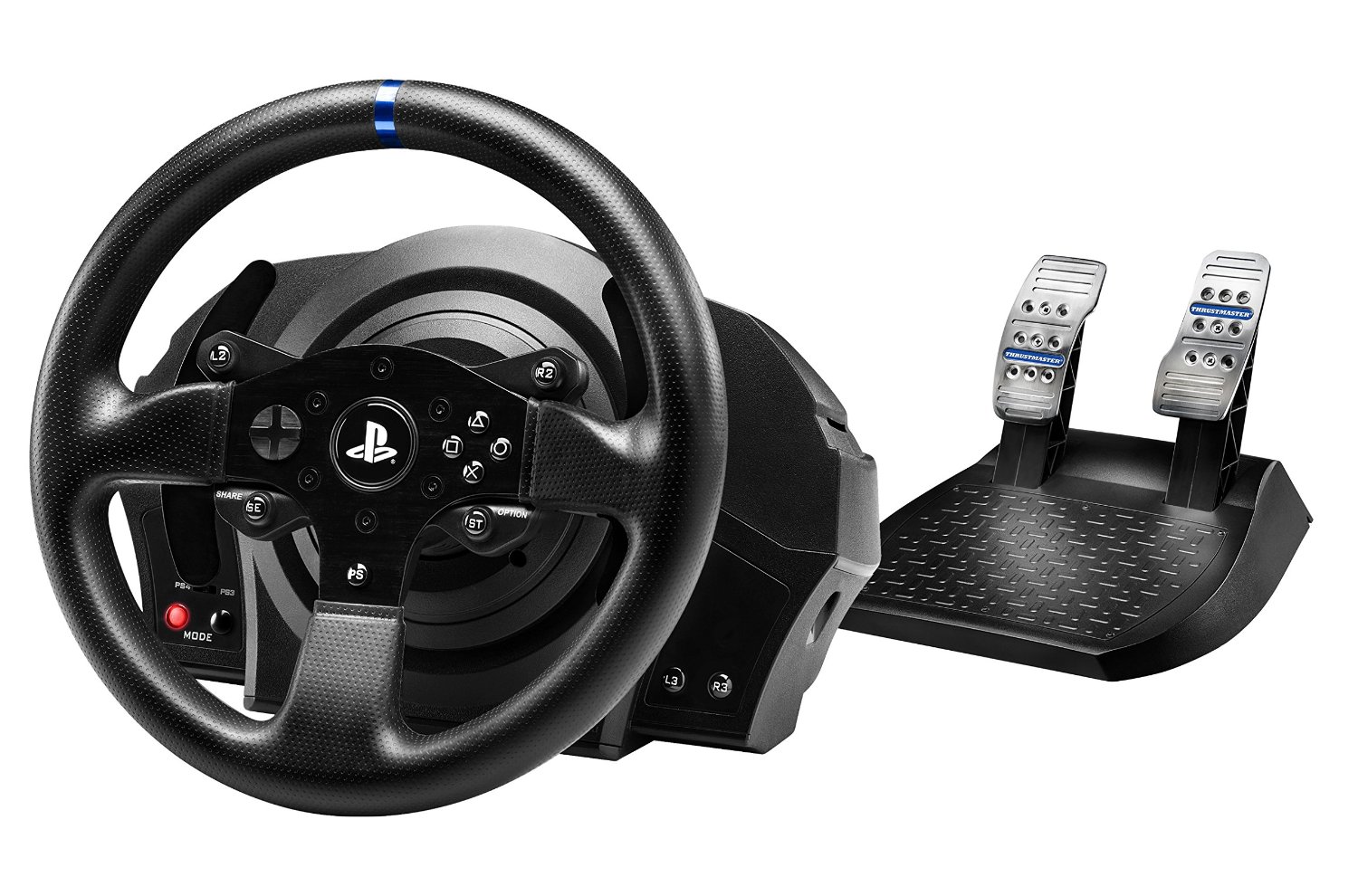 Let’s start at the higher end of the market and jump straight into fifth gear (sorry) with a look at the Thrustmaster T300 RS.  Thrustmaster surely have to have the greatest product name ever?  Anyway, spend the best part of £250 and this snazzy piece of equipment can be yours.  Immediately on the downside you will notice that the pedals feel slightly flimsy, especially given the price you’ve paid for the kit.  However, the 11 inch diameter wheel itself is incredibly sturdily built, with brushed metal central spokes and a reinforced rubber finish which offers superb grip.  It certainly has a huge amount to offer.  Moreover, if these sorts of thing matter to you, it’s also the first wheel to be officially licensed by Sony to work with the PS4.  Go Thrustmaster; go T300 RS.

It’s a force feedback wheel, which means that it stimulates the sorts of forces you’d feel in the real world such as the feel of fighting against turns, and it’ll allow you to feel when the back end of the car you’re driving is about to lose grip around a turn.  Such products really are a force to be reckoned with owing to the full-on experience they offer – the sparkliest, snazziest graphics in the world cannot possibly hope to replicate the feeling wheels such as this one can offer you.  With its HEART technology (apparently, Hall Effect AccuRate Technology – a bit of a tenuous acronym, I grant you), it is incredibly accurate and your movements will translate consistently to the action on the screen.

Some features are missing which the hardest of hard-core amongst you might miss, for example the pedalboard lacks a clutch.  However, I imagine that the vast majority of you won’t be too put out by this, especially when you consider the quality of racing games there are currently available for the platform.  If this improves, perhaps your expectations for the associated technology can justifiably increase.

The layout of the wheel means that you can utilise the wheel alone without having to juggle it and a gamepad.  This is the least I would expect personally, having forked out £250 for it.  It does mean that you can control your whole console without resorting to the gamepad which will save time and a certain amount of stress.

If it is a delicious prospect with the current range of racing games, just imagine what this wheel will offer you when (if?!) the next Gran Turismo game is released…  Even I just shuddered with excitement, and I’m not personally that fussed about racing games.

Despite everything the T300 has to offer, it is understandable that it will simply be out of reach financially for many.  It’s nearly the price of a blinking console after all.  If this is the case, then you could do worse than consider the Thrustmaster T80.  And I’m not recommending this one just so that I can write the word Thrustmaster again; honestly. 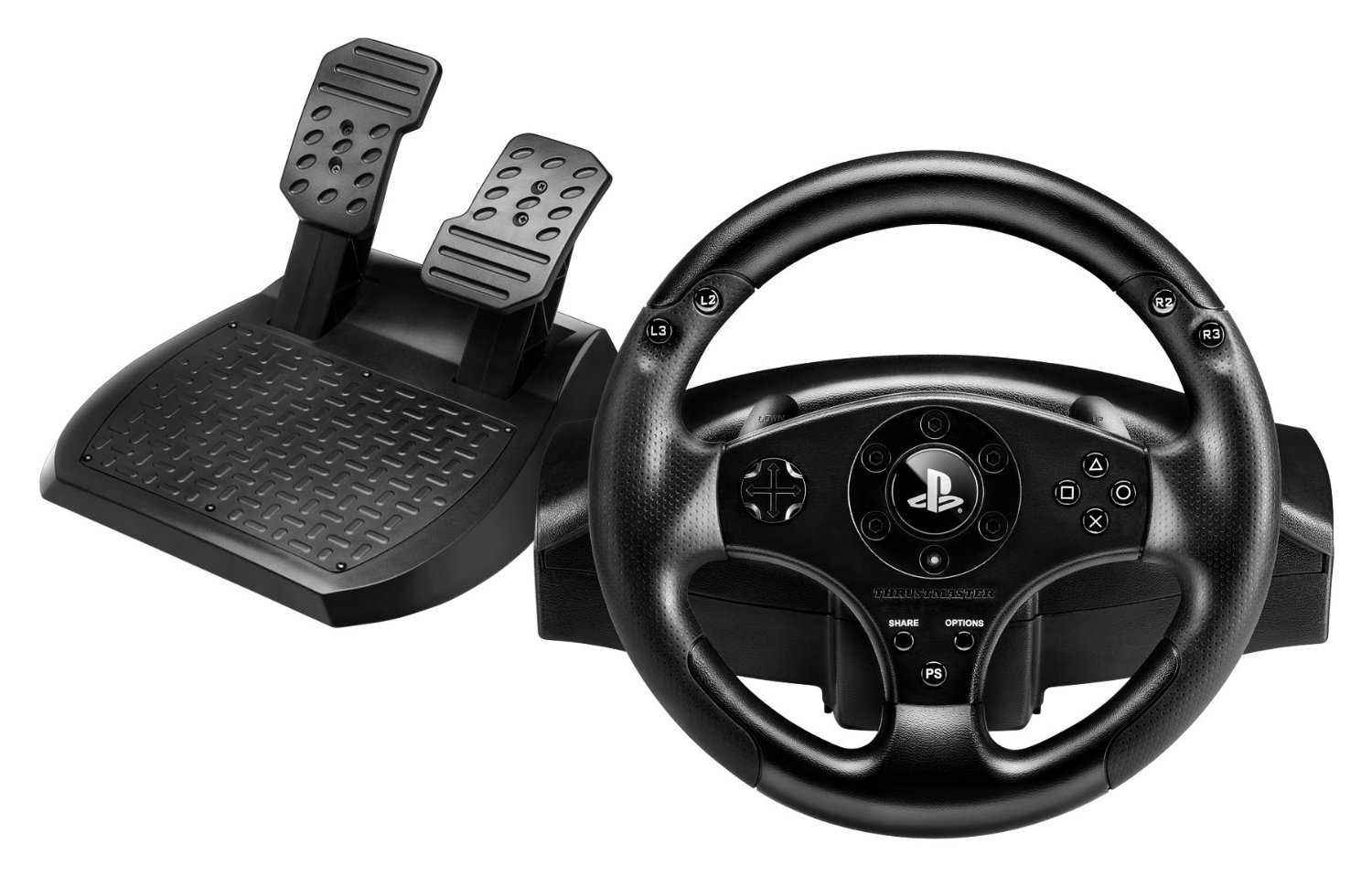 The T80 retails for around £70 so is a much healthier price, and the excellent design remains a feature.  It’s also the same size as its pricier cousin but perhaps doesn’t feel quite as sturdy.  A lighter wheel evidently makes for a less controlled driving experience; something to bear in mind when weighing up your options.

The T80 will give you a good, but perhaps not an excellent driving experience.  You should also be aware that it doesn’t necessarily come with too much information as to what games it’s compatible with.  Niggles other users have noticed are the placement of the buttons on the wheel – which you may end up accidentally pushing at inopportune moments.  Furthermore, if playing Driving Club, for example, there is no option to adjust the sensitivity of the wheel, which may well translate to other games as well.  Although mere niggles, they could well lead to mounting frustration.

So, then, given that the PS4 owner and lover of all games racing and driving is limited to Thrustmaster for a wheel of the steering variety, the message really is rather clear.  If you can afford it, and if you’re that big a driving fan, save up and splash out on the T300.  If you can’t wait to save, or will never want to fork out that much, then the T80 will be a perfectly respectable wheel which will at least be an improvement on using the controller.

New PS4 Controller by Hori Perfect for XBOX Veterans
When Can We Expect Gran Turismo 7?
To Top